Carbon unbuildup and other shenanigans

Tech section strictly for the FJR. Everything from oil changes & suspension setup's to removing sheep hair from hard to reach places on the bike so that your wife never finds out.
Forum rules
Post Reply
12 posts • Page 1 of 1

Carbon unbuildup and other shenanigans

I can put a lot of miles on, and have a lot of fun with the FJR, without using much throttle or RPM. So coming up on my 94000 mile valve check I thought it might be a good idea to put a dose of RingFree in a full tank and flog the carbon out before measuring valve clearance.

Good news-I've got some damn fine looking intake ports. Although how much of that is due to the RingFree I don't really know.

Bad news-the rear tire that I thought I could still get a two day ride out of is now toast.

Knowledge tucked away long ago and recently recalled-much throttle and RPM uses up tires QUICK. 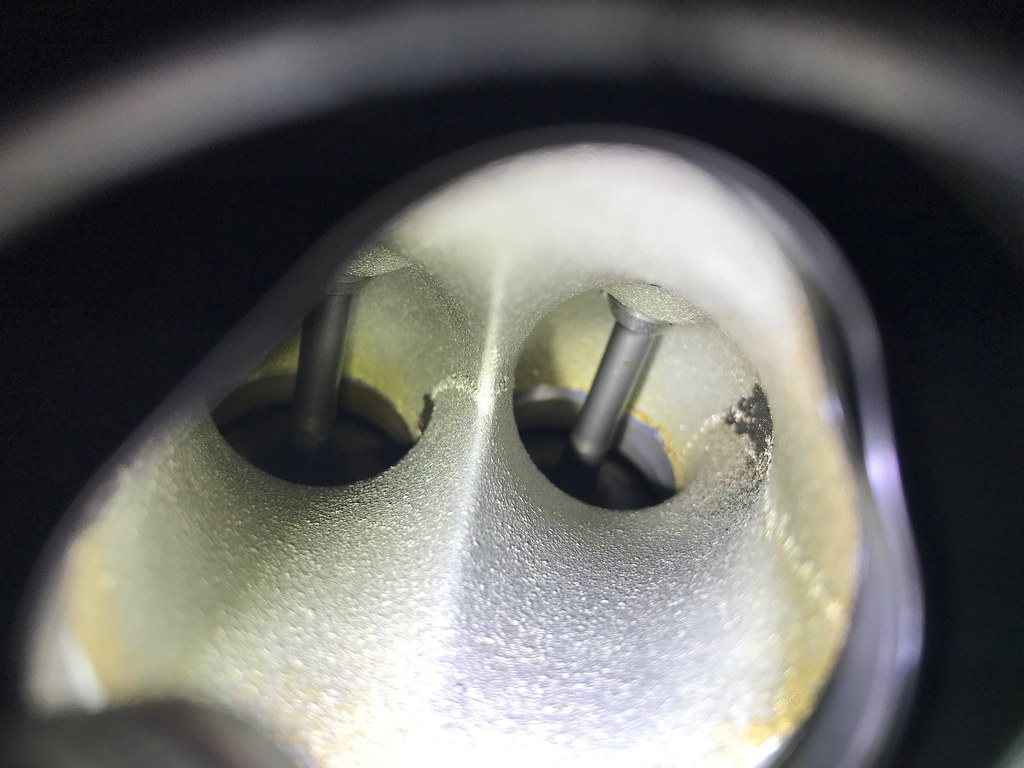 That looks like a brand spanking new engine. CLEAN!

Yeah, I seem to recall a tire wearing episode on East Fork Road a long time ago in a galaxy far far away...
Top

Wow, amazing how clean that is.
Top

Ha! Not wanting to alarm you, and you shouldn't be if the bike is running well.... You may be a clean livin' guy, but gonna tell you the intakes in my '06 Project Bike looked the same after 90k. The insides were a different story.... I'm not sure I'm a fan of RingFree, the OP had used it constantly, but rode like grandma (shifted gears at 3500, bike didn't even see the power band (5000 up). RingFree is unlike anything I've seen, it has a high content of some kind of oil. I would think that oil might contribute to carbon build-up, and the insides of this head and pistons was on the oily side. I don't think RingFree will rid an engine of carbon, as won't most injection cleaners... further measures are required.

What happens with carbon build-up on the intakes is it doesn't allow the valves to seat/seal properly, so you lose compression. This can cause hot starting problems and if worse, colder starting problems. To diagnose, do a compression test on a warm engine, and if low, do a leakdown test (compressed air into the spark plug holes with a fitting) and see if leaking back past the intakes. One could also stick a borescope down the spark plug holes and see what build-up is on the pistons, and if you have one with a mirror attachment, can perhaps get an idea of what's on the intakes.
One would think valve clearances would grow in that case, but they don't seem to (perhaps cancelled out by normal wear). It would be interesting to compare valve check reading history and shim changes over the life of the bike.

IF carboned up, without disassembly to manually remove the carbon, one can on a hot engine at high idle, remove airbox and spray water directly into the throttle bodies, which turns to steam and will lift carbon... may have to repeat a few times. Valve clearances will then definitely get smaller, potentially to the point of no clearance (no carbon, valve seats deeper), likely having to repeat valve checks until you find them stable (I would do the water treatment each of these times). One can also use say Gumout combustion chamber cleaner which will have solvents (and perhaps some water) to accomplish the same thing applied similarly to my "water injection" method (used in the old days).

So, I'll always say don't ride like grandma, get the bike into the power band once in a while (the horsepower only really starts kicking in at 4500+, full HP at 7000), but what you want is a 'clean burn' as well, so perhaps not "full bore WOT acceleration" either (mixture richened by ECU to get all that power).
Riding like grandma does not give you a clean burn as the engine is loaded, underperforming for what it is, call it lugging with richened fuel mixture, and over time........ say no more. Note, exhaust valves are relatively clean as they run hotter than anything in there.

wheatonFJR and FJRPittsburgh loved this
Keep yer stick on the ice........... (Red Green)
Duct tape can't fix stupid, but it can sure muffle the sound.
Top

I can attest to the water into the throttle bodies. Did that on the '07 after getting the engine back in the bike. I did a valve clearance adjustment first then ran it and sprayed the water in. Opened it up again and found the clearances had opened up quite a bit. Had to make adjustments on all the intakes I think.

I can say that at 37k miles my '04 had stuck piston rings and I guarantee you that the engine lived life over 5,000 rpm with abrupt, large throttle openings every time it left the garage. Yamaha regularly promotes RingFree for their boat engines and the bottles are sized to treat boat fuel tanks. Some Gen I and Gen II engines would suddenly have Fast Starter Syndrome and not start and they had low compression readings. Treating the engine like it had carbon buildup or stuck rings would fix the problem.

Back in the bad old days, when the Big 4 automakers started to implement smog motors I had a GM vehicle that would regularly carbon up. I could tell it was happening because the engine would start to knock and the knock would progressively get worse. Another major carbon problem was the EGR system where the entire EGR passage would carbon up. One thing that absolutely did work on carbon buildup and stuck rings was GM Top Engine Cleaner. The exhaust would stink and it would fog the neighborhood with black smoke but it did a great job. The next generation of Engine cleaner is GM Upper Engine and Fuel Injector Cleaner which does a great job of removing carbon. It isn't inexpensive like water but it is more thorough. The last time I used the Upper Engine cleaner it recommended changing your engine oil after its use.
Top

See "The Saga of the FestarStrom" http://www.fjriders.com/forums/viewtopi ... 20#p116190
"The only Dumb Question is the unasked Question " - Anonymous
Eat every Sandwich like it is your last!
Top

When it comes to all the snake oils, beware of marketing... I usually look up the MSDS for such products and have found the vast majority of the so-called injector/combustion chamber/top end cleaners are largely naptha with a couple of things thrown in to make it unique to the brand. Additives can be isopropanol, or harsh solvents like toluene, benzine, etc. There are two kinds of naptha, heavy and light... heavy being more like kerosene and light more like camp stove fuel. Lots of products use naptha, BBQ lighter fluid, WD40, Seafoam, GooGone, etc. Seafoam is largely naptha and isopropanol, and the alcohol takes care of far more water ethanol can't handle. If you have "bad gas" it means you got water in it usually. Pure gasoline doesn't degrade very quickly at all (up to two years).
If there's a CAS number listed, you can look that up and know exactly what it is.
So on to Ring Free, 70-90% heavy naptha with some light naptha thrown in and let's make it our own by putting in a teeny percentage of "proprietary" something or other. MSDS below......
How do all these work... naptha, the slow acting solvent over time dissolves gummy stuff. Perdy simple. And you pay $75-100+ a gallon for it if you do the math.

wheatonFJR loved this
Keep yer stick on the ice........... (Red Green)
Duct tape can't fix stupid, but it can sure muffle the sound.
Top

That eventually led to this

I have in past used the water trick to remove carbon. Also have used ATF the same way to clean and lube the stuck rings. It seamed to work well the couple times I did it.
Top

Prevention is the best medicine. Twist that bitch like you hate it.
bill lumberg loved this
WWPD.
#SnowMexican
Note: The FJR1300ES offers a significant level of power & performance. It is not intended for novice or inexperienced riders.
Choo choo mf'r.
Top
Post Reply
12 posts • Page 1 of 1