The 2021 Calendar Contest is available for purchase! Links can be found here!

Making the FJR yours - what have you done, want to do, plan to do, and how?
Forum rules
Post Reply
5 posts • Page 1 of 1

I’ve been a Givi customer for as long as I am motorcycling, a long time indeed. When the “tank-loc” line of tank bags came out, I bought the XS307 model specific bag for my FJR. I really like the tank locking system and the bags are well made.

But the zipper for the main compartment is total crap. It’s the “waterproof” design, with the material flap on top of it.

The actual zipper is smaller in tooth size, and to date, I have gone through 3 (THREE!!!) XS307 bags because of this exact same problem. Here’s what happens – eventually the inadequate zipper jumps the track and after that, the entire bag is garbage.

It breaks at the same spot every time – at the corner where the zipper is under strain trying to change directions.

I contacted Givi for the 3rd time to replace my tank bag, and learned that I was out of warranty. While they wouldn’t replace the bag for free, they offered a steep discount on anything I wanted to buy. I asked them to hold that thought so I could do research.

I shared the problem with a good riding buddy who rides a Versys 1000. He showed me his tank bag and offered it to me to try. Mike uses the XS320, which is made for the Africa Twin. He learned how to modify it to fit his needs. I tried it out on the FJR and it is most EXCELLENT in every way.

Here’s a simple comparison of the two bags. The XS320 (shown left) is wider at the top, but tapers toward the back. It is also slightly taller by about ¼”. Like the XS307, the XS320 unzips from the bottom to expand for the full 15 liters. 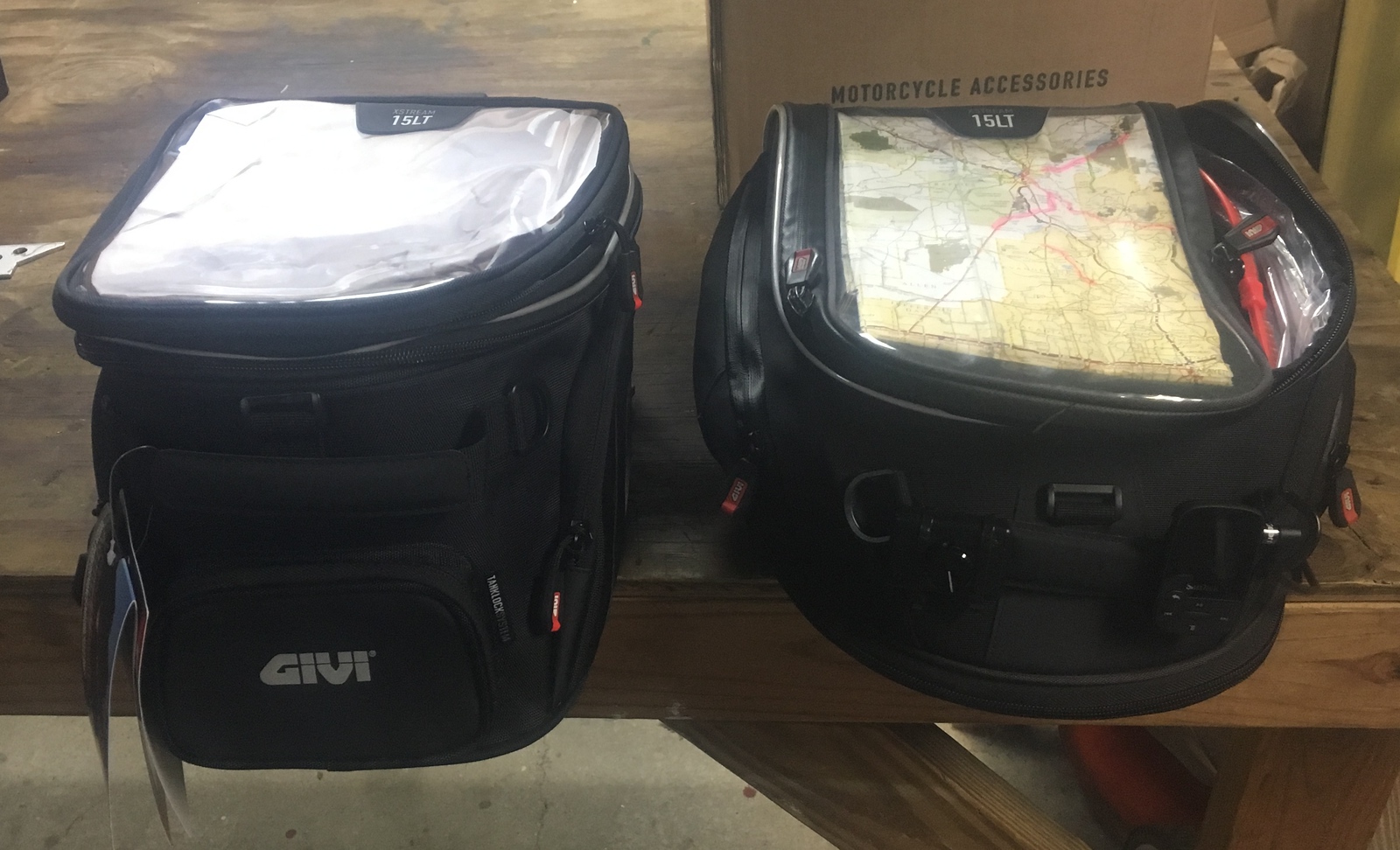 Looking at it sideways, the back of the bag swoops downward to accommodate the Africa twin’s tank. More on that later.

The zipper for the main compartment is WORLD’s better. It has a larger tooth pattern, and the zipper is pulled from the side, which puts it in MUCH less strain than from the top. The “curve” for the zipper to turn is much more shallow as well.

Here’s the modification that is required for this bag to work on the FJR. The tanklock fitting has to be rotated 90 degrees.

The 4 holes that mount the tank lock fitting have to be drilled. Access to the screws is underneath an access flap from the inside of the bag. 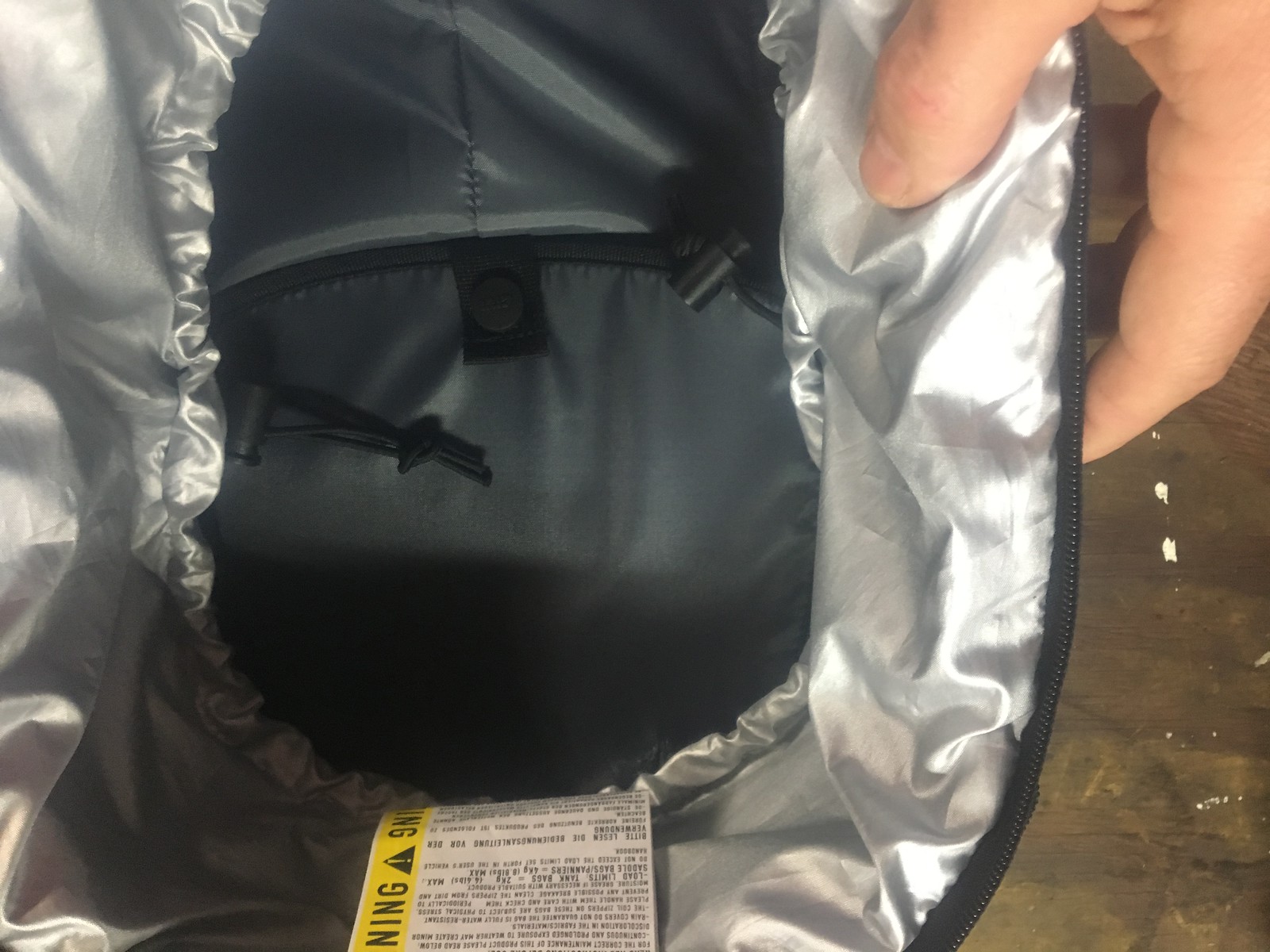 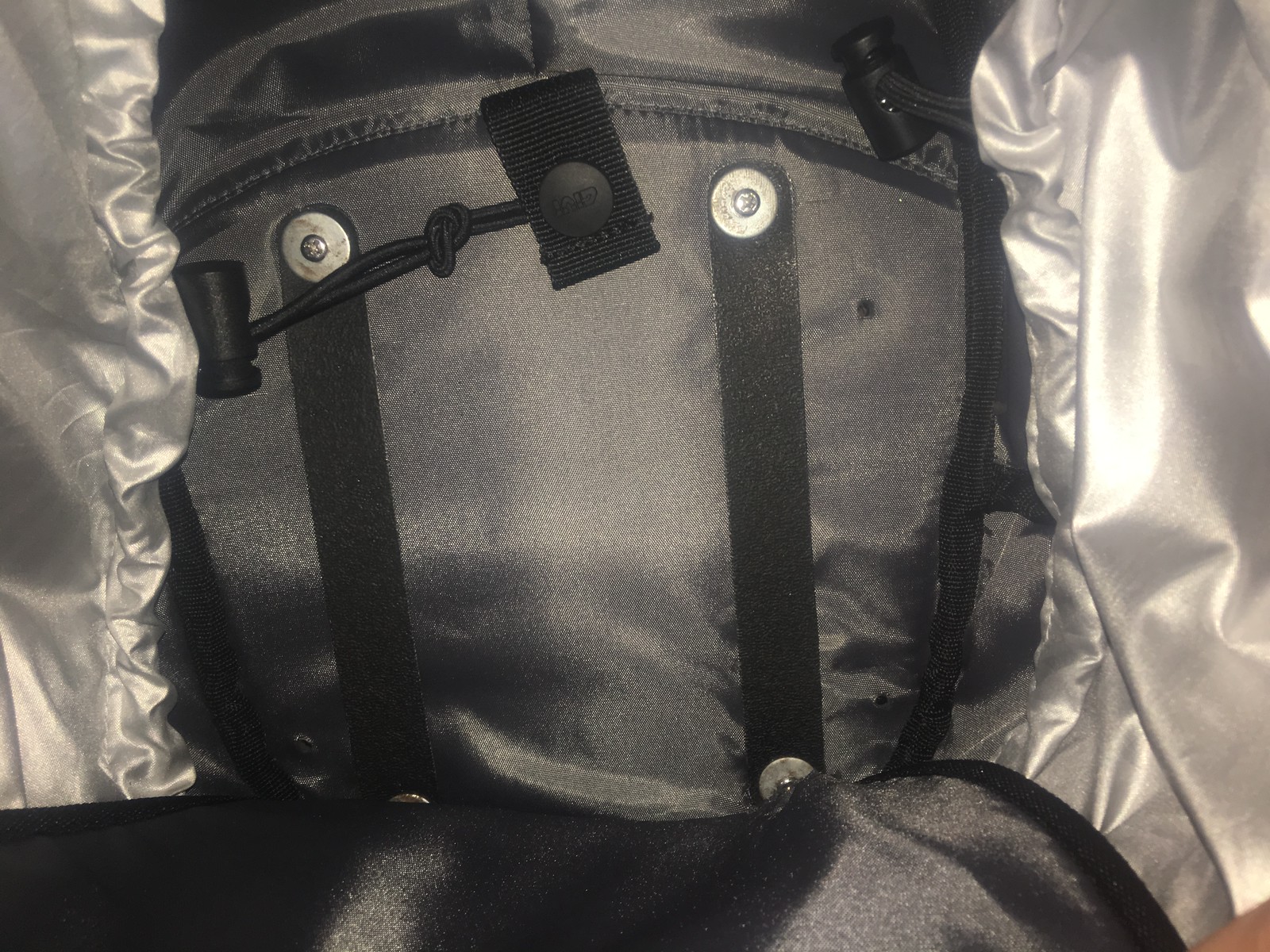 I didn’t take any pictures of me re-drilling the holes, but it seem self-explanatory. You just need to be aware of the need for the red-tab for the unlocking mechanism ending up on the right side of the bag, and the fact that the holes are not squarely oriented.

I took some exterior silicon sealant and filed the old holes for waterproofing. All I had was white, but I’m not worried about it as this is underneath the bag. Still, clear sealant would look better. 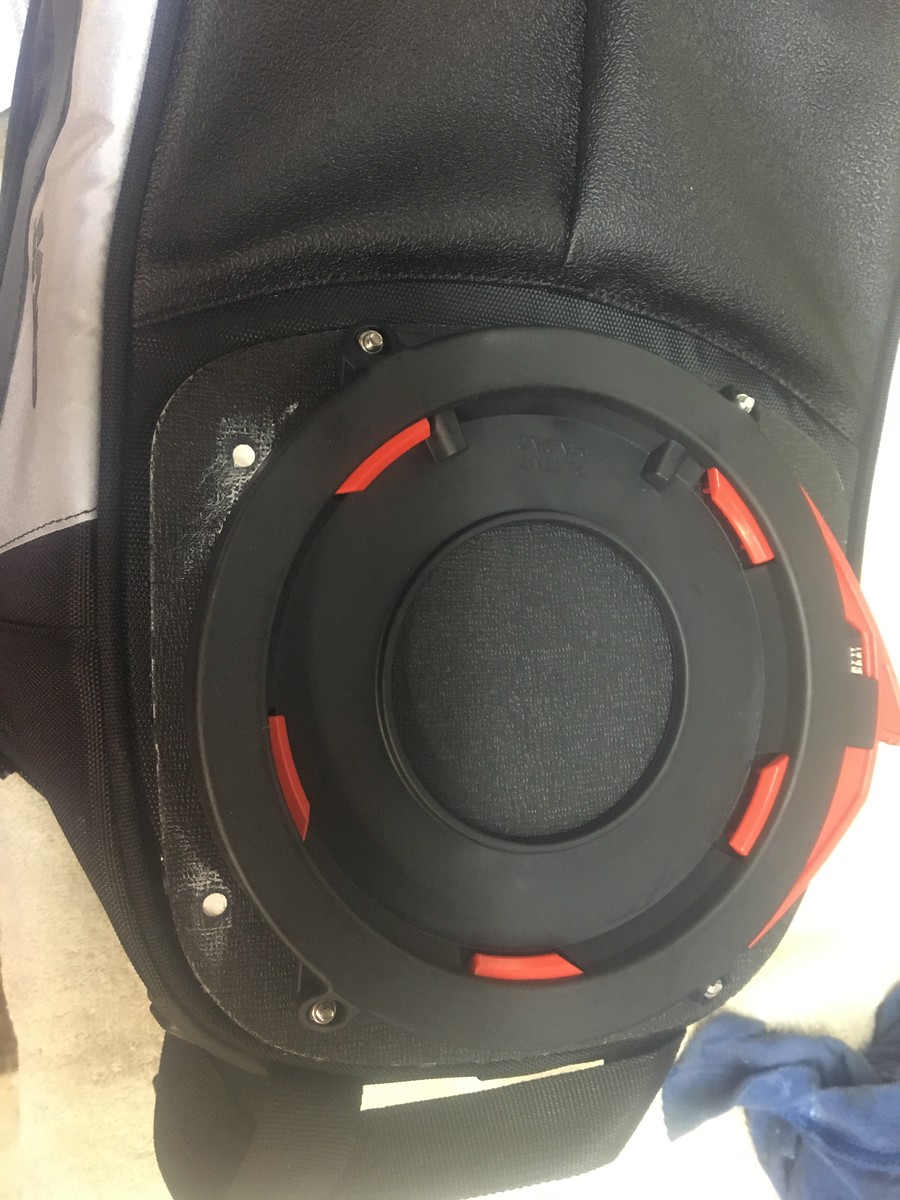 The holes on the unlocking side were partially restricted, so I used a socket to prop up the fitting.

Sealant coming up to the inside – exactly what we want. 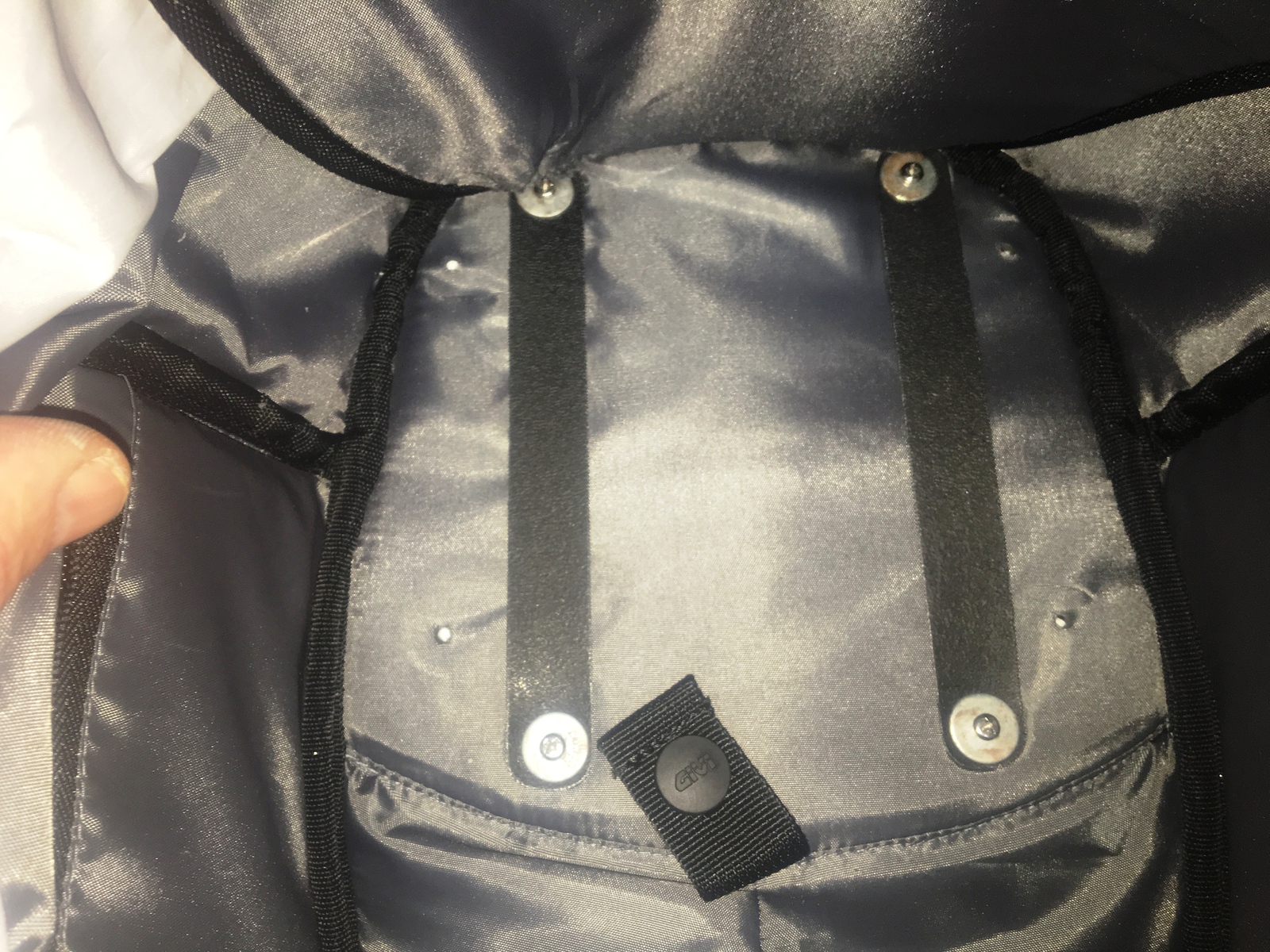 4 pieces of Gorilla Tape and we are all sealed up. 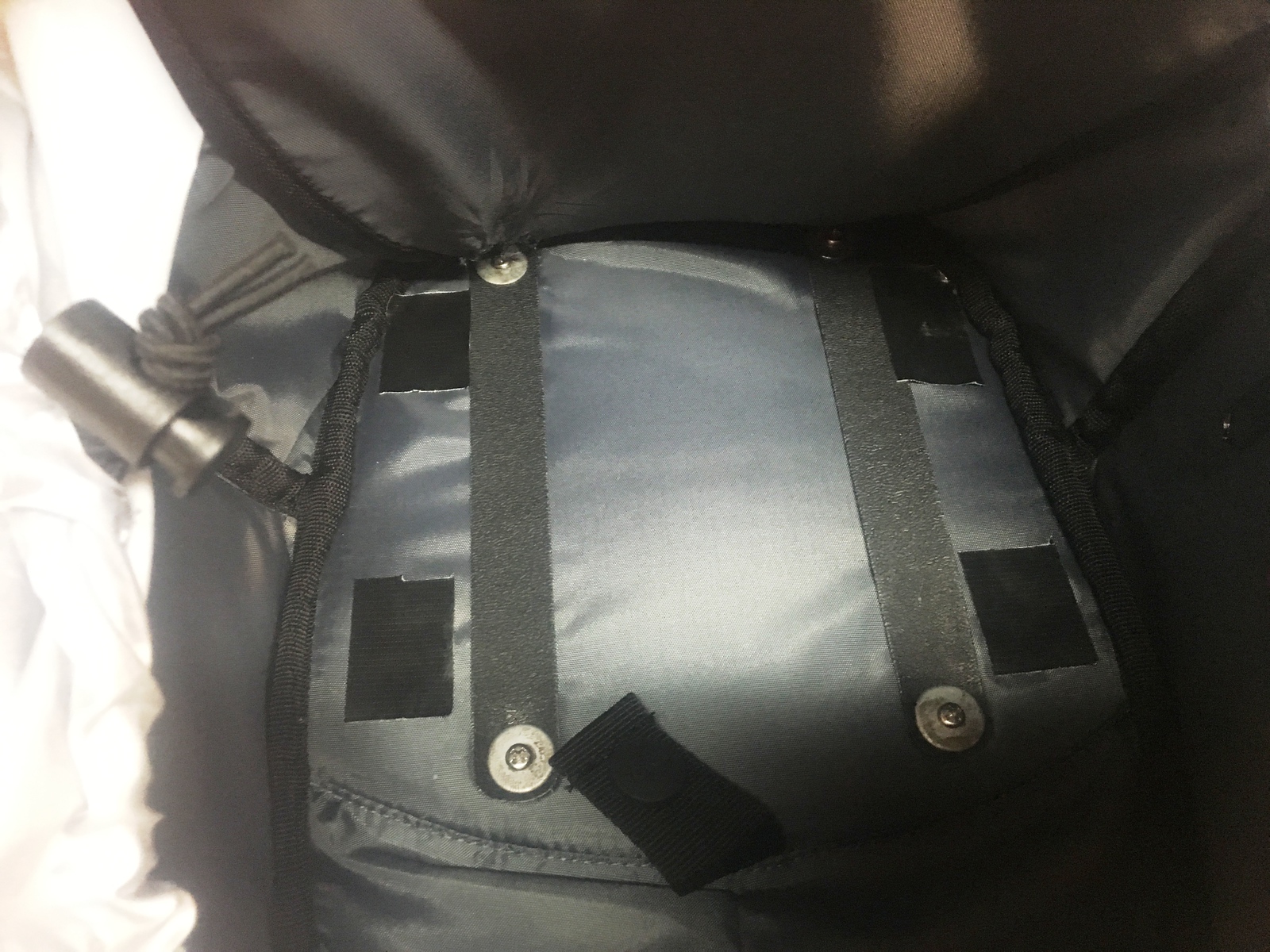 Again, the access flap on the bottom of the bag hides all of this. Out of sight, out of mind.

Like the XS307, I cut the carrying strap off the XS320. That thing is useless. I also put the “tablet” window flap on the shelf. No need for that – I’m old school, man…

In addition to the zipper, there are other advantages of this bag over the other for the FJR. One such advantage is that the map window is now wide enough to accommodate TWO FULL FOLDS of a standard map. That alone would have done it for me.

SIDE BAR: For you young-uns out there, they make things called PAPER maps and they are absolutely wonderful. On these, the battery never runs out and you don’t need spare fingers to zoom in or out. Check ‘em out when you can!! 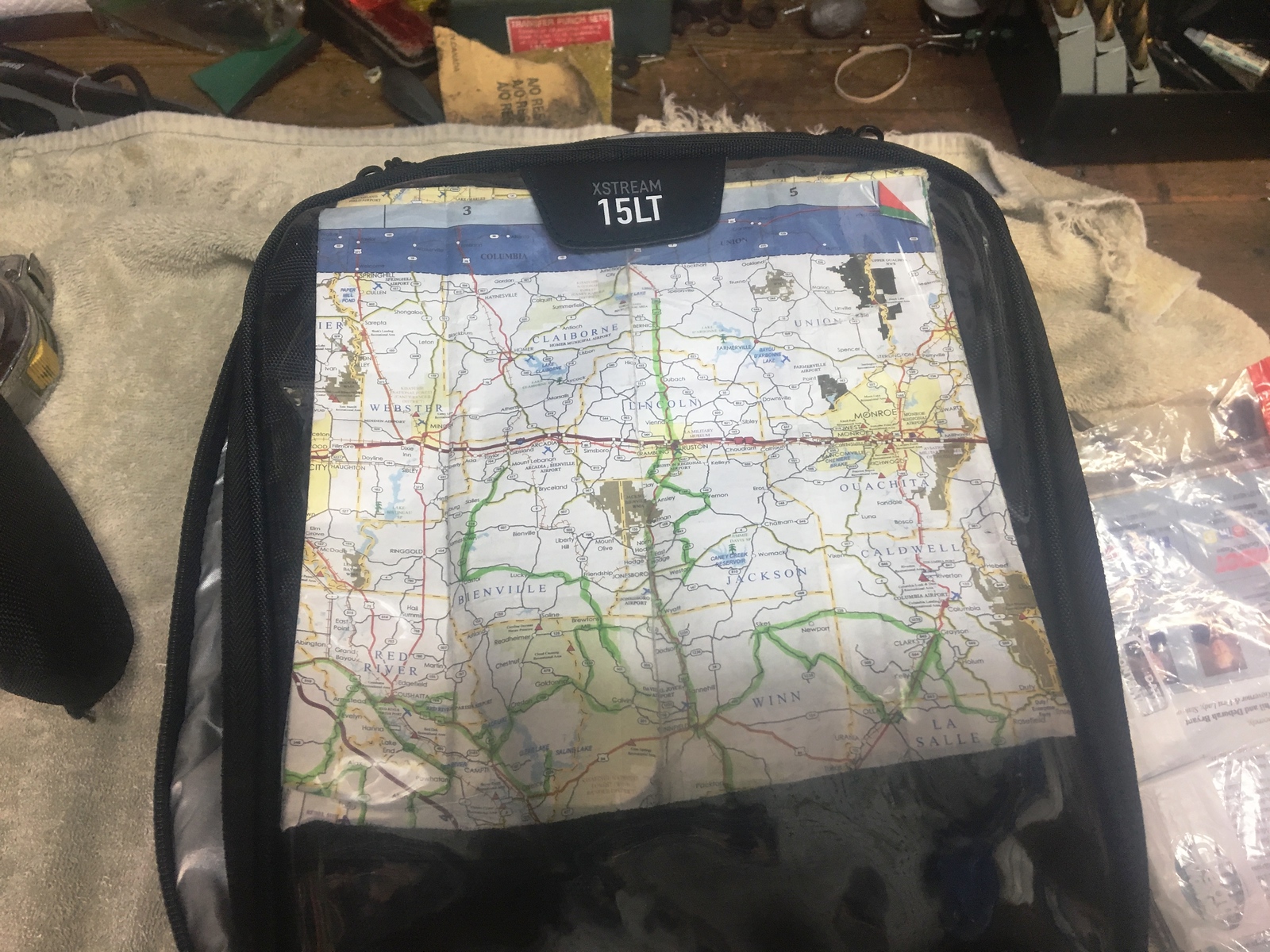 Another advantage is inside the bag. I store my spare helmet shield in my tank bag and the wider front end now allows it to fit better in the hole. Less bend on the shield and less stress on the top zipper because this bag is slightly taller.

Here’s another great change. The horn doesn’t hit the bag when I least expect it. This picture depicts the handlebar at full left lock, and as you can see, there is still a full “finger’s gap”.

However, here’s the one “rub” in the whole project, if you’ll pardon the pun. The gentle “swoop” of the bag downward makes it touch the tank in one small spot.

However, I have a fairly large tank protector on my bike that I installed to guard against my big belly. It would appear that the tank bag rub spot is on top of the tank protector. Cool! 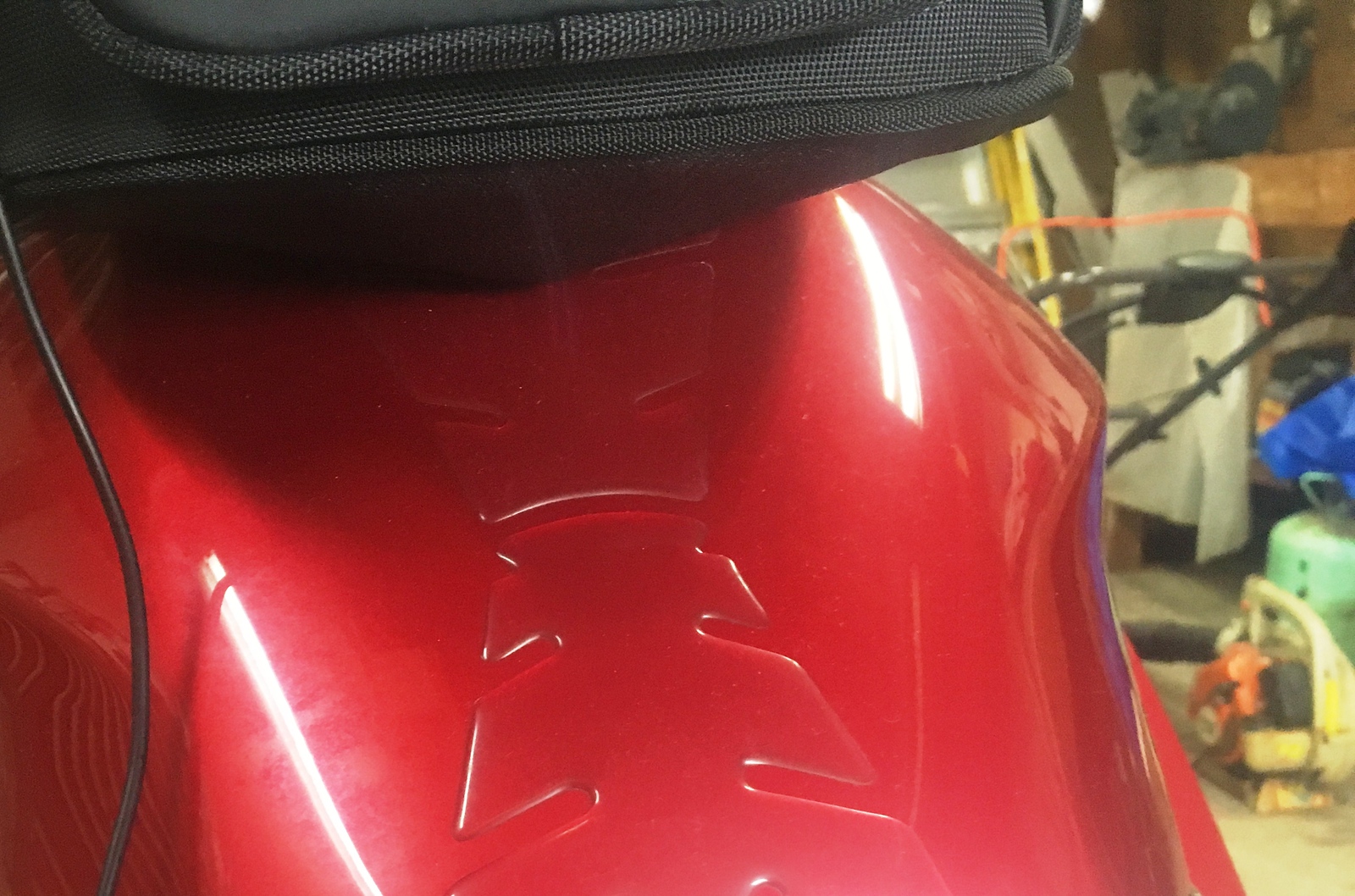 Honestly, that downward swoop is going to be very practical. I choose to put things in that part of the bag that I don’t need to get to often. On the old bag, inevitably, those things would always find their way to the back of the bag from the forces of the bike moving forward (admittedly, sometimes those forces were higher than others – bad Pants). Now, that pocket will hold that stuff in place nicely.

There is also 3 pockets outside of the bag (v/s two for the XS307), and the 3rd pocket will be great for some common stuff like ear plugs.

So I’m thrilled about it now! Hope this helps others somewhere along the way.
NTXFJR, griff, Cav47 and 1 others loved this
"I guess it comes down to a simple choice, really. Get busy living. Or get busy dying."
- Andy Dufresne, Shawshank Redemption

Nice looking bag pants. So if I want to get this bag and don't have the locking ring on the tank, just get the bag and the ring for the FJR right? And then modify the ring orientation like you did.

That's correct. You have to get the locking ring for the FJR, because the hole pattern fits the tank cap fitting. I believe that is the BF-11 tank ring.

You modify the ring orientation on the XS320 to fit the FJR tank ring.
"I guess it comes down to a simple choice, really. Get busy living. Or get busy dying."
- Andy Dufresne, Shawshank Redemption

Hppants wrote: ↑Sat Feb 23, 2019 5:17 pm That's correct. You have to get the locking ring for the FJR, because the hole pattern fits the tank cap fitting. I believe that is the BF-11 tank ring.

You modify the ring orientation on the XS320 to fit the FJR tank ring.

Thanks - it looks like it actually needs the BF-05 ring according to Givi.

You are correct - it is the BF-05.
"I guess it comes down to a simple choice, really. Get busy living. Or get busy dying."
- Andy Dufresne, Shawshank Redemption