We have tunnels in Pittsburgh. I don't know if there are any in Cleveland or not.
Top

Just a little update, before Hack and I ran the FJR, I had decided to try something different when I filled the coolant (slowly, I always dribble it in to let air escape). I would almost fill, then go squeeze the lower rad and water pump hoses to purge air, refill, squeeze again.. did this three times. Each time, the coolant level would drop a bit and I'd add more. I was trying to see if I could totally eliminate entrapped air, possibly a useful thing to do at tech days or at least hoping to learn something, which I have.
I finally topped of the rad right full, installed the cap, and overfilled the reservoir by about 3/4"... I knew there had to be a wee bit of air left as it's impossible to have a straight vent path, I expected after a cooling cycle the reservoir level would return to the Full mark or a hair above. And so it did, no real surprise. I always tell folks that the second cooling cycle will drop maybe another 1/4", but you still have the reservoir more comfortably nearer the full mark.
Then I ran it (last video), warmed it up to 4 bars, shut it down, did a throttle body sync, shut it down and left it. Next day I am contemplating what I should be doing next and noticed the level had dropped considerably on cooling cycle #2. Pics are from cycle #1, then #2. 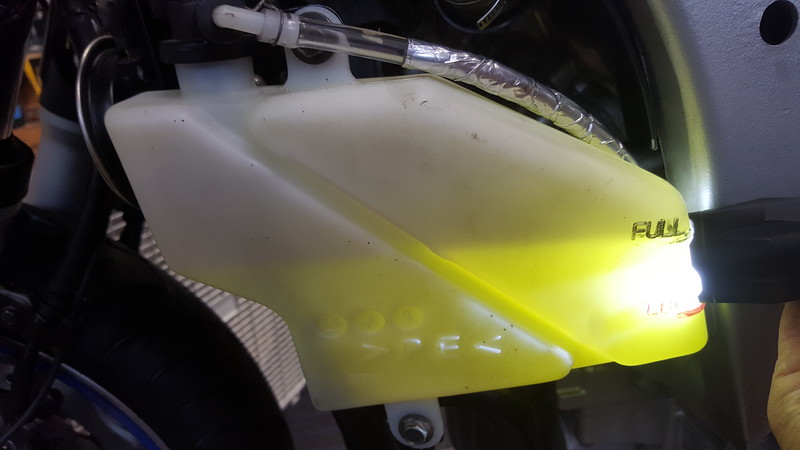 I'm surprised there was so much air, and with that much, surprised it was able to develop enough vacuum to suck that much from the reservoir. It took 4 oz. to top it back up to the Full mark. I guess since the new engine and everything else was totally dry, no residual coolant whatsoever, and that's why so much extra was needed..... so my squeezing hose theory still needs to be tested on a regular coolant change..... I will test this on my '14 as it is due for a valve check.
Bust and wheatonFJR loved this
Keep yer stick on the ice........... (Red Green)
Duct tape can't fix stupid, but it can sure muffle the sound.
Top

I had the same issue last time the dealer did my coolant...took it back, and they added more.
Bust loved this
"RIP Petey"

When I changed the coolant I went thru three or four heat cycles before it wasn't pulling a noticeable amount at cool down. It took less each time but even after the fourth one it still pulled a little bit. After a few days of riding I checked the level and it had pulled in more yet but was still above the low mark; about 2/3's below the high mark. Checked again a couple days later and it looked like it had stabilized.

Thanks for the reminder, I need to check mine.
Old Forum name: deang
Top

Update - The bike is almost done, awaiting some riding weather for a ride. Meanwhile I should call this the Blue Bling stage..... I had started it up to verify a couple of last minute things, mainly that the heated grips worked... basically, it appears the controller (not the ECU, as these particular ones are not tied to the ECU) needs sufficient voltage to operate. My guess is approx. 13.5 volts, only available when the engine is running. They work fine and the idle speed has been tweaked to 1100 rpm.

Now to leave you with some pics of the Blue Bling. 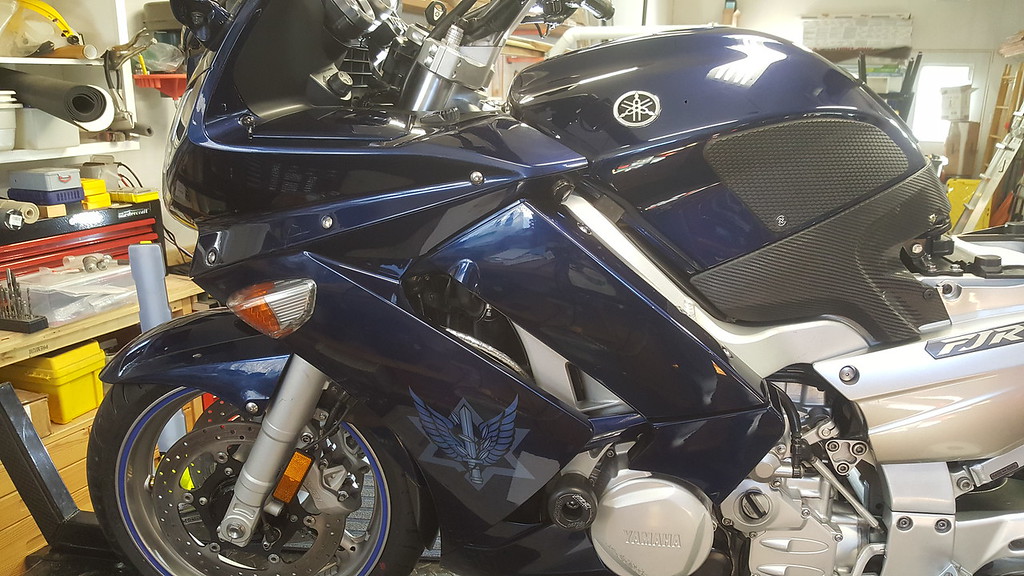 All I have to do now is install the seats and we're done. Time to put all the tools away and clean up the shop..... this has been a fun project and I think now I can now say I've touched virtually every part of an FJR. Happy to have everyone along for the ride and hope some might be able to learn something from all this. This one's a great bike for somebody!
Steel_Gin, FJRPittsburgh, John d and 4 others loved this
Keep yer stick on the ice........... (Red Green)
Duct tape can't fix stupid, but it can sure muffle the sound.
Top

Is this all real, or just fake?
Top

Wheaton I witnessed it myself yesterday. I did not hear it run but I looked for any abnormalities and I must say Ray has outdone himself once again. whoever buys this one is getting as close to new as you can.
FJRPittsburgh and wheatonFJR loved this
Top

'Just put a set of those levers on a friends F800GS... 'Nifty design.
I like the way they pivot... Less chance of snapping off during a lay-down

'Good job Ray... 'Glad I had the opportunity to see some of it come together in person too